Kingsman The Secret Service: Seeing What Others Don’t (Movie Review) 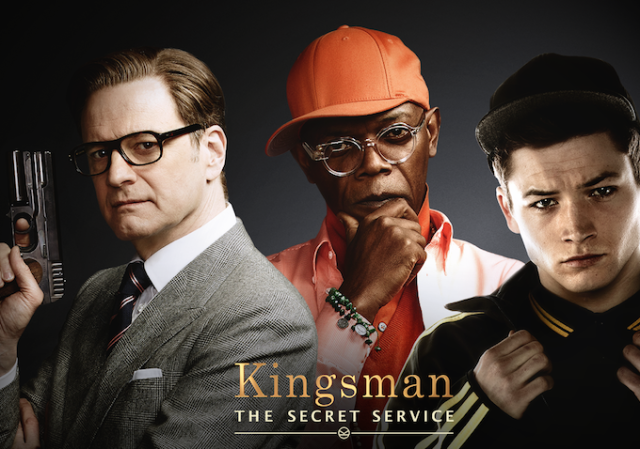 Matthew Vaughn (Kick-Ass, X-Men: First Class, Layer Cake) has taken Mark Millar’s graphic novel The Secret Service and turned it artfully into an artful send-up of the James Bond movies, and a social commentary on plenty of the issues that plague the world today. Kingsman: The Secret Service has its fair share of explosive moments and explosively offensive ones, but all in all, it’s an entertaining blast of a film for those in Oscar artsy fatigue.

Like Timur Bekmambetov’s Wanted (another Millar title), Kingsman follows the exploits of a novice, the rogue street kid Eggsy (Taron Egerton), as he learns at the feet of gentleman spy, Harry Hart (Colin Firth). But the main theme there isn’t all that Vaughn follows: there are the beautifully slowed-down fight scenes a la Guy Ritchie, and the colorful, nearly animated color shots of action and lavish backdrops. Eggsy enters a Hunger Games-like training under the watchful eye of Merlin (Mark Strong, excellent as an Alfred-like mentor), following in the footsteps of his own father who died years earlier in the service. Meanwhile, the megalomaniac Valentine (Samuel L. Jackson, complete with lisp and a New York Yankees cap) and his henchman, Gazelle (Sofia Boutella) are plotting world population reduction. It’s a Bond-like storyline, complete with a fitting baddie.

While a Bond film has never made me question whether or not Bond would live, I was new enough to Millar’s Secret Service to have moments of doubt about who would survive from the Kingsmen. In fact, like Game of Thrones, Vaughn shows a significant disregard for holding onto anything nostalgic that you might expect: everyone, unlike Stallone, is expendable. But it’s the mashup of funny and dangerous that make the film wildly entertaining.

If you’re aware enough of world population, global warming, or rampant cellphone use, then Valentine’s proclamations have a bit (come on, he’s batty!) of truth to them. His use of a Westboro Baptist Church-like cult as the testing point for his sim-card mind control will frustrate some, but it’s social commentary in itself about the violence proclaimed in the name of Jesus. [The fact that he ‘unleashes’ humanity’s closeted violence makes for some interesting brain fodder, too: are we all inclined to that hate naturally or is it something that we’re supposed to fight in each of us?] If you’ve seen a Bond movie, you know some of the situations are ridiculous, like Bond-and-villain repartee or sexual situations (all of which Vaughn mocks). If you’ve watched a movie and wanted the stakes to actually feel higher, then this is the film for you. But it’s got a heart, too.

Early on, Hart and Eggsy have a conversation about what Eggsy can do with the rest of his life, and why he’s wasting so much potential. [For the record, there’s a bit of commentary here about a young man growing up without a father figure.] Eggsy asks what Hart sees, and Hart sees a young man who wants to make a difference and do good. It’s not something anyone had ever seen in Eggsy but Hart did. In I Samuel 16:7, Samuel is wrestling with finding the man God wants to be the next king of Israel, and God says, “Do not consider his appearance or his height, for I have rejected him. The LORD does not look at the things people look at. People look at the outward appearance, but the LORD looks at the heart.” In Kingsman, after all of the gags, social commentary, and R-rated exploits, there’s a story about recognizing that you can’t judge a book by its cover (or at least its cockeyed hat and rough boy posturing). Eggsy’s journey to the man he could be makes this story better than its contemporaries in spoof/action flicks.

Kingsman: The Secret Service won’t be for everyone but I thought it was laugh out loud funny, and genuinely exciting. rating: buy it!

I'm searching for hope in the midst of the storms, raising a family, pastoring a church, writing on faith and film, rooting for the Red Sox, and sleeping occasionally. Find me at ChristianCinema.com, Cinapse.co, and the brand new ScreenFish.net.
View all posts by Jacob Sahms →
This entry was posted in Movie Reviews, Pop Culture, Theology and tagged Colin Firth, I Samuel 16:7, Kick-Ass, Kingsman, Mark Millar, Matthew Vaughn, Michael Caine, samuel l. jackson, Taron Egerton. Bookmark the permalink.