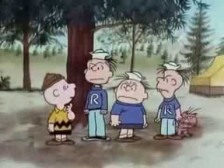 In this 1977 original, Charlie Brown and his crew head off to camp where they wrestle with the leadership, bullying, and group dynamics. If it wasn’t for being in the wilderness, it would be just like high school! Featuring the same voice cast as the 1975 TV special, Be a Good Sport, Charlie Brown, it focuses on Charlie Brown and Peppermint Patty’s responsibility as ‘team leaders,’ and the group’s struggle with a trio of bullies who take the camp competitions to a whole new level.

The kids all arrive at camp in varying degrees of frustration and anxiety. Like most kids in summer camps, not all of them are thrilled about the prospect of living somewhere with food they’re unfamiliar with, beds that aren’t comfortable, and an absence of the comforts of home. But they do their best to settle into the way the camp is laid out (military style, with physical training, etc.) and the various competitions that tax them mentally and physically.

Pretty quickly, I found myself focused in on the way that the group dealt with the adversity of the bullying by the older kids (and their cat, Brutus). This group of four intimidates the larger group of Charlie Brown and his friends, as well as Snoopy and Woodstock. Ultimately, as usual, it proves to be Snoopy and Woodstock who will stand up to them, rescuing everyone to some degree. It’s again the mystery of Charles Schulz: salvation doesn’t rest in the hands (or hearts) of the human characters, no matter how bighearted or compassionate that ‘Chuck’ tries to be.

I’m becoming more of a fan of the series of specials as my children have taken to It’s the Great Pumpkin and A Charlie Brown Christmas. Families can do a lot worse than sit around and enjoy the tame levels of entertainment and morality that Schulz drew up, even if we have to hope there’s a ‘someday’ where Charlie Brown isn’t the punchline of every joke! rating: buy it

I'm searching for hope in the midst of the storms, raising a family, pastoring a church, writing on faith and film, rooting for the Red Sox, and sleeping occasionally. Find me at ChristianCinema.com, Cinapse.co, and the brand new ScreenFish.net.
View all posts by Jacob Sahms →
This entry was posted in Comics, Movie Reviews, Pop Culture, Reviews and tagged A Charlie Brown Christmas, Be A Good Sport, Bullies, Camp Remote, Charlie Brown, It's the Great Pumpkin, Peppermint Patty, Snoopy, Woodstock. Bookmark the permalink.