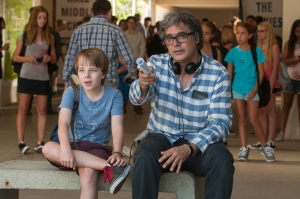 The night before his twelfth birthday, Alexander (Ed Oxenbould) wishes his family would experience the typical day of a middle schooler who isn’t “cool.” While most of what happens that day isn’t his fault, it’s still pretty… terrible. His dad (the always funny Steve Carrell) is interviewing for a job while caring for the baby; his mom (Jennifer Garner) butchers an editing job and infuriates Dick Van Dyke; his older brother (Dylan Minnette) can’t wrangle a driver’s license or his girlfriend; and his sister (Kerris Dorsey) is sick on the day of her big theater performance. No one’s day is going right, but it’s all pretty hilarious.

Director Miguel Arteta makes his first stab at a family comedy, after turns directing Jennifer Aniston in The Good Girl and the Michael Cera/Ed Helms crowd (Youth in Revolt, Cedar Rapids, respectively). Sure, there are a couple of more adult (or at least older kid) references, but for the most part, he shifts seamlessly into the world of Walt Disney with the full-length adaptation of Judith Viorst’s 1972 children’s book.

While the plot doesn’t resemble the book (much at all), it does build on the ideas about what makes a terrible day. Middle school and high school can do that to you; so can a negative boss or searching for a job in your forties after being laid off. The truth is that everyone has problems, and life is mostly defined by how you respond to them. For the Cooper family, the response is tied to family: they may be crazy but they’re who they (each other) have.

Recognizing how the family comes together to love Alexander, and to stick to each other regardless of the outcome, defines the film, and gives it the heart it has. Yes, it’s laugh out loud funny throughout (saving the kangaroo for last was a solid move), but it’s also a reminder that blood is thicker than water.

In the special features department, “Alexander… In Real Life” gives us a look at Viorst and her son of the eponymous name that sheds some light on what they’re like, and how the book itself came about; for all of the laughs within the movie, nothing pleased my crew as much as the “Delightful, Magnificent, Very Good Bloopers” complete with Garner and Van Dyke dancing. It’s PG so it did cover the bases and have a little bit for everyone – genuine Australian cowboys notwithstanding. rating: buy it

I'm searching for hope in the midst of the storms, raising a family, pastoring a church, writing on faith and film, rooting for the Red Sox, and sleeping occasionally. Find me at ChristianCinema.com, Cinapse.co, and the brand new ScreenFish.net.
View all posts by Jacob Sahms →
This entry was posted in Movie Reviews, Parenting, Pop Culture, Reviews and tagged dick van dyke, Jennifer Garner, Judith Viorst, middle school, Steve Carrell, twelfth birthday. Bookmark the permalink.